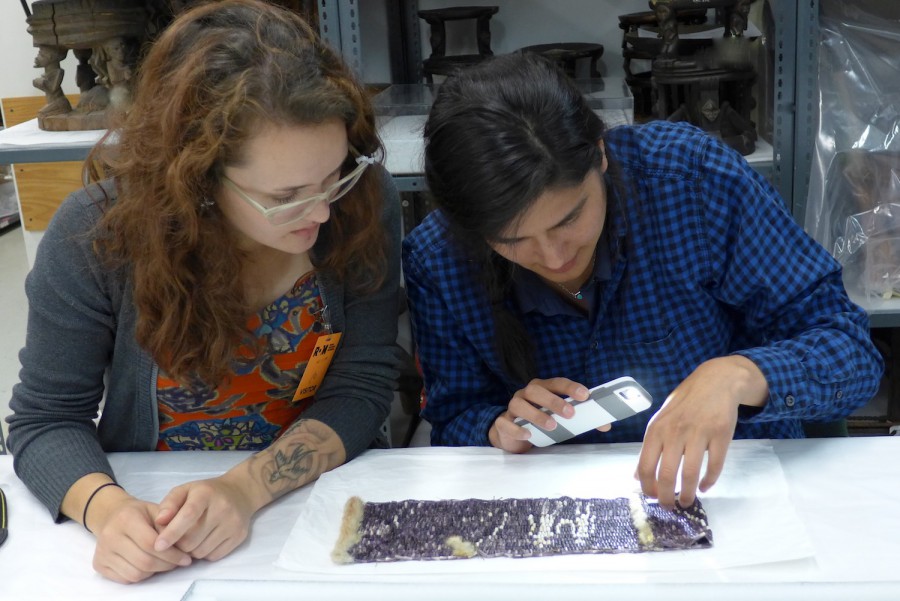 Undergraduate and graduate students at Penn are engaged in a remarkable range of research, community outreach, cultural recovery, and other projects centered in Native American and Indigenous Studies, while operating within and across academic disciplines. Some of these students are Indigenous scholars (members of Native American, First Nations, or other Indigenous nations) who have chosen to work directly with their home communities or with other Indigenous peoples. Some students are non-Native scholars pursuing regional or cross-cultural research and other projects on behalf of, or in collaboration with, Indigenous communities. NAIS students are working in North America, Central America, South America, Africa, Australia, and elsewhere; in many cases, they are finding common ground with Indigenous peoples and concerns in geographically distant locales.

Examples include the following: Students in the Graduate School of Education have assisted with language restoration projects in Lenape communities in Pennsylvania, and with Andean communities in Peru, Bolivia, and Ecuador. Students in Nursing have been working with practitioners of traditional Cherokee medicine and with impoverished western reservation communities to discern how best to integrate traditional medicine with modern health issues. Students working in the disciplne of Anthropology collaborate with Mayan, Australian Aboriginal, New Zealand Maori, Southwestern Pueblo, Northeastern Algonkian, and Canadian Haudenosaunee communities, among many others. Students and faculty in the Penn Cultural Heritage Center are assisting with the preservation of endangered cultural heritage in war zones, in remote forests, in tribal reservations, and in urban museums. In all of these projects, the theories and methods that shape the field of NAIS encourage attention to cultural diversity, personal reflexivity, intellectual acuity, and engaged pedagogy, with particular attention to human rights, decolonizing methods, and Indigenous cultural revitalization and survivance.

Student Comments on NAIS at Penn:

Sarah Parkinson  (Museum Anthropology Undergraduate Student):
"These classes have given me an understanding of the diversity within Native American groups as well as the issues that affect these groups today. Most importantly, the NAIS courses emphasize the modernity of Native Americans, which I think is often forgotten when the media is filled with images from the distant past. I think that it's really important to correct stereotypes and misconceptions about Native Americans, as they are one of the most misrepresented groups in popular culture. Having a more accurate understanding of Native Americans can help academics and professionals in any field that might deal with Native issues, including public health, history, anthropology, and law. I am certain that the knowledge I gained from NAIS courses will inform my future career in Anthropology."

Zhenia Bemko (LPS Undergraduate Student):
"We closely examined the "Native American Voices" exhibit at the Penn Museum, which allowed us to notice intricacies in exhibit construction and differing views between Indigenous and Western ideology. The mini ethnographies we produced allowed me to explore and interpret in my own voice topics like international Indigenous law and the origins and evolution of Lacrosse. I’ve also studied “Native American Literature” where we were exposed to both traditional and current knowledge keepers through literature, film and guest speakers. One of our most important assignments was to digitalize Haudenosaunee stories in order to return them to the tribe, so Iroquois youths could translate the stories into their own language."

Tiffany Cain (Anthropology Graduate Student):
"NAIS is, I think, a very important initiative, and a sensible choice for students who have the interest and have the room in their studies to concentrate on something that the major alone cannot offer. Native Studies can make a huge difference to Native students especially, but also to those students looking to have a more informed and keen eye toward minority populations in the US in their future careers. The inaugural “Native American and Indigenous Studies Conference” brought together an awesome array of Native and non-Native scholars committed to research with, by, and for American Indian and global Indigenous communities. NAIS is a critical space for considering questions of indigeneity and racial formation in the modern state and in a globalized world. But it’s also about pedagogical choices - how do we learn and how do we teach? How can these things be culturally-informed and culturally-sensitive? How can an awareness of other lifeways change the kinds of questions we ask about the world?"

The University of Pennsylvania is home to an active local community of Native American students on campus. Natives at Penn (NAP), founded in 1994, was formerly known as Six Directions. NAP members host an annual powwow, seasonal dinners, regular meetings, and a range of special events at the Greenfield Intercultural Center. NAP maintains an informative Natives@Penn website and Facebook page and Twitter feed to network with current and new NAP members, Native American alumni, and visitors. Their goal is to increase visibility for the small but growing number of Native American students at Penn, by connecting with the Penn community, by attending local tribal events, and by creating partnerships with their home tribal communities. Current members of NAP hail from Native nations across the continent, including Cherokee, Cheyenne River Sioux, Choctaw, Mescalero Apache, Mashpee Wampanoag, Micmac, Miskito, Nanticoke Lenni-Lenape, Navajo, Oglala Lakota, Potawatomi, San Ildefonso Pueblo, Washoe, and Zuni Pueblo, among others. They also participate in the Ivy Native Council (INC), a student organization comprised of Indigenous representative from all of the Ivy League Schools who seek to promote Indigenous education and communities.

Most of the current Native American students at Penn are pursuing studies in disciplines outside the field of NAIS. Their interests, which are as diverse as their tribal backgrounds, include Biology, Engineering, Business, Education, Marketing, and a wide range of other studies. Some of the Native American students at Penn have also chosen to pursue projects in the field of Native American Studies, focusing on cultural representation and expression by working with the Penn Museum, the department of Anthropology, and/or the Graduate School of Education. Students, faculty, and Penn community members are encouraged to reach out to NAP for social networking or potential collaborative research projects.