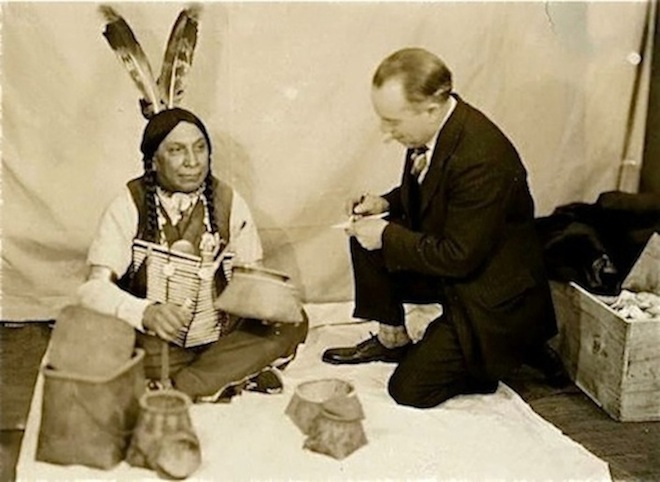 Penn's history of engagement with Indigenous students in general, and Native American studies in particular, reaches back to 1755, when Benjamin Franklin recruited Jonathan and Philip Gayienquitioga (Mohawk) to attend classes at the Academy of Philadelphia. In 1847, Robert Daniel Ross (Cherokee) graduated with a medical degree. From 1912 to 1932, the University of Pennsylvania Museum of Archaeology and Anthropology (Penn Museum) employed Louis V. Shotridge (Tlingit) as an ethnologist for expeditions to Southeast Alaska.

During the early 20th century, Penn developed relationships with a large number of Native American Indian communities through the efforts of Dr. Frank Gouldsmith Speck. Speck was the first recipient of the Anthropology PhD at Penn, and he served as Chair of the Department of Anthropology from 1913-1950. His Native collaborators included: Cayuga and other Six Nations Haudenosaunee in Canada, Cherokee in South Carolina, Mohegan in Connecticut, Nanticoke in New Jersey, Naskapi in Labrador, and Penobscot in Maine, among many others. The first Native American student of Anthropology at Penn was Gladys Tantaquidgeon (Mohegan), who served as a research assistant to Speck from 1924-1930. Speck also brought Native consultants in to lecture in classes, including medicinal expert James Webber Witapanoxwe (Delaware), dancer Molly Spotted Elk (Penobscot), and American Indian Association leader Joseph Strong Wolf (Chippewa). For decades, most of the studies and research collaborations with Native Americans were routed through the Anthropology department and/or the Penn Museum. During the 20th century, more than 100 Native American students graduated from Penn, but very few pursued doctoral degrees.

During the 1990s-2000s, Native American efforts at Penn were primarily focused on increasing outreach to local Native American communities, encouraging Native American student recruitment, and networking with student support services and alumni. In 1994, the Native American student organization "Six Directions"---now called "Natives at Penn" (NAP)---was founded and based at the Albert M. Greenfield Intercultural Center (GIC) directed by Valerie DeCruz. In 2007, Dr. Timothy Powell promoted Native American Studies as a cross-disciplinary academic initiative in his role as the first Director of the Penn Center for Native American Studies (PCNAS). The second Director of PCNAS, from 2008-2012, was Dr. Robert Preucel, Curator of the American Section of the Penn Museum, who worked with a number of research fellows to expand community outreach and encourage student research. During that same era, Penn hired a Native American recruiter, Tina Pierce Fragoso (Nanticoke Lenni-Lenape) to work in the Office of Admissions. The University also began offering an American Indian Residential Program at DuBois House. At GIC, Vanessa Iyua (Navajo) was hired as Associate Director to serve as an advisor to NAP and other student groups. In 2013, Dr. Preucel stepped down as Director and closed the PCNAS when he left Penn to direct the Haffenreffer Museum at Brown. The connections that Penn has developed over time with various Native American nations, however, continue in the form of various outreach, consultation, exhibition, and repatriation projects.

In 2013, Penn hired Dr. Margaret Bruchac (Abenaki), the first Native American faculty member in the Department of Anthropology, to revitalize the Native American Studies Initiative. Dr. Bruchac designed a broad-based inter-disciplinary academic program by consulting with faculty from virtually every department teaching courses with Native American components. With support from the School of Arts and Sciences Dean's office, a new Faculty Working Group was formed, including representatives from the departments of Anthropology, Education, History, Law, Linguistics, Nursing, and Religious Studies. During the fall of 2013, this group refined the proposal for the new Native American and Indigenous Studies (NAIS) Minor. The proposal was accepted by the University of Pennsylvania Curriculum Committee in January 2014, and in May 2014, faculty from the School of Arts and Sciences voted unanimously in favor.

This is an exciting new initiative at Penn, which is only the third Ivy League institution (after Dartmouth and Cornell) to offer formal academic specialization in the distinct field of Native American Studies, with the added inclusion of Indigenous Studies. Undergraduate students at Penn can gain insights into the methods and theories undergirding the field through the new "Introduction to NAIS" course, and they will find that they can apply a number of existing relevant courses from their transcript to the NAIS Minor. Students may choose to complete an interdisciplinary Minor (across at least three different departments) within the School of Arts and Sciences, or they may choose to complete an Interschool Minor across two or more different schools (SAS plus Education, Law, and/or Nursing). The current core NAIS curriculum provides a solid foundation, but a number of exciting new courses and new research collaborations are also in production. Watch this site for future developments in NAIS!

For more information on the NAIS Minor, see NAIS Courses.